This is the first article of The Lost Cause. This is also generally the part where I tell you what shape the website will take and what it will look, but the most honest answer is “I don’t know”. At this point it could be anything. What I can say for certain is that there will be articles about TV and other about film. I’m not going to guess or predict what that will ultimately turn out to be. We’ve got to start somewhere, though, so here we go.

There’s an inherent risk reviving anything- be that film, television, books, or video games. Look at The Godfather Part 3 or Futurama: properties that were once great, but came back as an indisputably lesser version of itself. In some instances it’s a matter of too much time having passed; others it’s the creative force and executives behind it that had no idea what they were doing. Sometimes it’s both. Tv revivals are the name of the game today, though, so let’s all just buckle up.

The big question here was whether or not this revived season of The X-Files would be successful and if it would be any good. The first part of that is: yes, from a viewers standpoint, it did decent numbers. Its highest was sixteen million and its lowest was just over seven. Certainly well enough for network television but nothing to write home about.

Then there’s the question of the quality, which is another discussion altogether.

To say that Season 10 is uneven would be a laughable understatement. In a six episode run, only two of these were any good. It’s not a ringing endorsement for the continuation of the series when the only episodes of any quality were the serialized ones (“Mulder and Scully Meet the Were-Monster”; Home Again”) and the mythology heavy ones (“My Struggle”; “My Struggle II”) were abysmally terrible. In a television landscape where the overarching story is everything that matters and the episodic format is quickly becoming obsolete and played out, why can it be that stand-alone entries were, by leaps and bounds, the most engaging and most fulfilling?

The mythos of the show has become so convoluted and hard to follow at this point, having changed and been altered so many separate times in its ten seasons that it’s almost impossible to keep track of now. What began in 1993 as a simple enough investigation into a government conspiracy regarding the existence of alien life and a possible cover-up  of that fact has now, twenty-three years later, morphed and twisted itself to death into a completely different conspiracy where aliens actually did come to Earth but a shadowy cabal has repurposed their technology to put alien DNA in people and control people? The X-Files has fully gone to a place where it’s too ridiculous to even hope to understand the larger plot. 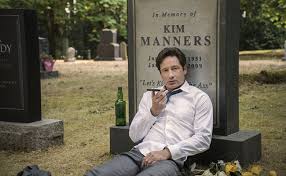 One of the most major problems that faced season ten is that the show would be honestly be better off if its creator, Chris Carter, had less and less to do with it. The episodes from this season that he wrote were the mythos-heavy “My Struggle” and “My Struggle II”, which leads any casual observer to conclude that Carter is only interested in the details of the series when those details are wildly uninteresting at this point and it’s the installments such as “Mulder and Scully Meet the Were-Monster” that are the standouts of the season. This is the shining jewel of the tenth season. Masquerading as a simple monster hunt and a reevaluation on Mulder’s part as to whether or not the monster cases he’s taken on and believed in so unflinchingly in the past is little more than smoke and mirrors that modern day technology can easily debunk. It’s a wonderful exploration into what it’s like to be human and and a great twist on the monster transformation trope.

But, to be frank, even an episode like this is far and in between in this season. You still have to endure an episode like “Babylon”, which is a stand-alone and several types of awful. It’s an episode so devoid of any meaning, yet tries all too hard to convince you that it saying something profound about terrorism and the power of words and how we treat our enemies. The outcome is essentially nonsense. With bad plotting, direction, and writing, the only slightly redeeming qualities are the presence of Lauren Ambrose and Robbie Amell, who bring a much needed breath of fresh air to the series and without these two, the episode would be completely unwatchable. Although Amell is criminally in both of the episodes he’s in (“Babylon” and “My Struggle II”), in typical Robbie Amell fashion.

To be honest, if they ended The X-Files and gave Robbie Amell and Lauren their own spin-off instead, that would be perfectly fine by me.

In short, was this tenth season of The X-Files good? No. Was it worth watching? Yes. Is it frustrating? Absolutely. Would I watch twenty more seasons if they continued to give me any hope that they’d make more episodes like “Mulder and Scully Meet the Were-Monster”? Without a doubt.

And that’s the single greatest thing I can say about this season.