Comical Amateur: A weekly column where I parse through comic books as someone that has read very few comic books. 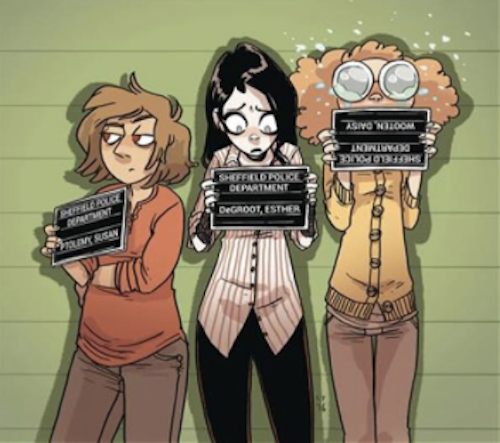 When you think of comic books, chances are fairly good that the first thing that comes to mind is either Marvel or DC. This is perfectly natural, but ultimately unfair to the very idea of comic books as a medium.

Comic books can be very exciting. They can get your blood pumping, jumping from panel-to-panel with a super hero bashing a villain to submission. Giant Days  operates in a completely separate sphere. It is a comic entirely about characters and the mundane yet exhilarating nature  of college.

Created and written by John Allison, Giant Days follows three freshmen women — Esther, Daisy, and Susan — at the University of Sheffield in the fictional town of Tackleford.

The thing that I most often come back to with Giant Days is the strength of the trio of characters and the sharp, witty dialogue that is so consistently strong. Like I said in the previously with Lumberjanes, there’s no real overarching that could keep you coming back. It’s not like a Marvel comic where you buy the next issue to find out how Captain America got out of whatever situation with the Red Skull (I’m just spitballing. That isn’t a reference to anything).

Instead, what will have you buying the next issue of Giant Days is the joy you feel existing in the — at times — absurdist yet undeniably, and sometimes depressingly, real world the trio exist in and the lively banter between them that fills the panels.

Even when insane, but entirely plausible things are happening, such as the gothic and boy-crazed Esther unexpectedly finding herself on a fratboy page meant only to objectify her and attractive women on campus, it’s the friendship that grounds you in the hysteria. Friends attempting to help other friends in the best way they know how to.

The biggest, and perhaps the thing that propels the comic to being truly important, is the way that it lets every character — including the secondary male characters — feel not exactly broken, but certainly wonderfully flawed in very human ways that allows them to screw up in ways that college kids do.

Esther is defined as a character for a good deal of the run as someone that is utterly incapable of getting out of her own way. It’s fun in the first year to watch the multitude of ways that she comes up to inadvertently make her life more difficult than it should need be. But witnessing a character that we love and is able to display less-than-solid judgment on things like going to class or dating a teacher’s assistant (seriously, Esther, come on) is good to see. Particularly in a landscape where we don’t see college-aged women all that often and when we do, they have to be the embodiment because god forbid that a young person make a mistake, but Giant Days lets them screw up.

It allows the gruff and cynical Susan to blow up her relationship with her boyfriend McGraw by getting too sucked into the political landscape on campus and neglecting her relationship. These are characters that mess up and there are always consequences with enough space in the story to ruminate on what those consequences actually mean for them as a learning opportunity while always coming from an emotional space that never ceases to be relatable.

That’s the real point of Giant Days: even when parts of it are ridiculous, there’s more than enough realism that it fully echoes to the reader, regardless of personal experience. Even if we’ve never known a guy like Ed, we still know what it would be like to be in love with someone that doesn’t love us back. It all comes from a real space.

It’s not necessary to have gone through a sexual realization like the one that Daisy does for that to resonate. She’s confused and we’ve all been confused, even if it wasn’t exactly like that.

The great thing that Allison does is create characters that feel like people you’ve met and were friends with. They’re so grounded, so realistic that the fact that they are all fictional feels almost secondary. Their world is crazy, but not so much that it feels like it could never happen to you.

Even if you took away all of the relatability and depth from the series, you would still still be left with the Sorkin-level dialogue that never feels anything less than intensely smart and funny. Some of the most fun you can have in a friendship is gently and lovingly lobbing well-placed jabs and this comic completely gets that.

As I’ve said before, I haven’t read a great many comic books. Even with that being said, it’s hard to imagine that I’ll be able to find other comics that are better well made than this one or that I’ll more readily recommend to people in the future.